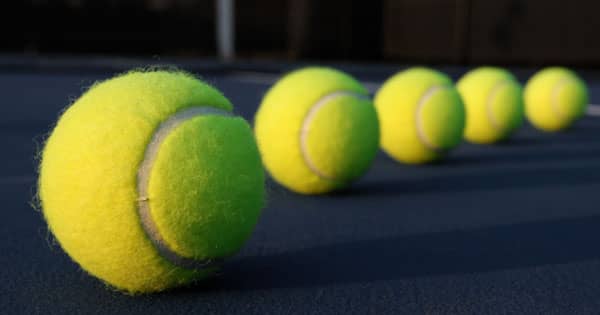 This is a follow-up to Was There Ever Nothing?

So there was never a time when Absolutely Nothing existed. Therefore, there has always been something. But what? If we go back to the very beginning, what was the Something that must have existed? Was it more than one Something, or just one? And what was it like, judging by what exists today?

Let's explore the quantity issue first. Let's call into mind again our large, pitch-black, sealed-off room. Imagine that there are ten tennis balls inside the room. As far back in time as we can go, there was only this: ten tennis balls.

What happens next? Let's say we wait an entire year. What's in the room? Still just ten tennis balls, right? Because there is no other force in existence. And we know that ten ordinary tennis balls -- no matter how much time passes -- cannot spawn new ones. Or anything else for that matter.

What we find out is that quantity is not an issue. If we go back to the very beginning of all things, the quantity of the Something that must have existed is not what's important. Or is it?

So the issue isn't quantity so much as quality. What qualities does the Something possess? Can it bring other things into existence?

Let's go back to our chickens, but let's get very exact, because such would be the case in the very, very beginning. We have a hen and a rooster in the room. They are in different parts of the room, suspended in nothingness. Will they produce other chickens?

No. Why? Because there's no environment to work in. There's nothing in the room except the hen and the rooster. No air to breathe or fly in, no ground to walk on, no sustenance for them to live on. They can't eat, walk, fly or breathe. Their environment is complete nothingness.

So chickens are out. Chickens cannot exist or reproduce without some sort of environment. With an environment, they could spawn other chickens. And with an environment affecting them, maybe they could -- though it seems absurd -- change into a different kind of chicken over time. Something along the lines of an otter or a giraffe.

So, then, what about non-living things? They don't need an environment, that's true. But then we're in the same predicament we were in with the tennis balls. Non-living matter doesn't produce anything. Let's say, instead of ten tennis balls, you had a trillion molecules of hydrogen. Then what happens? Over time, you still have a trillion molecules of hydrogen, nothing more.

While we're talking about non-living matter, let's also consider what it takes for that to exist. Ever heard of the Supercollider? Years ago the government embarked on an experiment to create matter. The Supercollider was miles and miles of underground tunnel through which atoms would travel at supersonic speeds and then smash into each other, in order to create a tiny particle. All that for the tiniest, most microscopic bit of matter.

What does that tell us? That our illustration of the ten tennis balls is not nearly as easy as it sounds. It would take an AMAZING amount of energy just to produce one tennis ball out of nothing. And nothing is all we have. The room has absolutely nothing in it.

So here's where we are. The Something that existed at the beginning must be able to exist without depending on anything else. It must be totally and fully self-sufficient. For It was alone at the very beginning. And It needed no environment within which to exist.

Third, to produce Something Else -- out of nothing -- requires an incredible amount of power. So the Something must have great power at its disposal. If it takes us miles and miles of corridor and the most energy we can harness, just to produce the tiniest particle, how much power would it take to produce the matter in the universe?

Let's go back to our room. Let's say we have a very special tennis ball inside the room. It can produce other tennis balls. It has that much power and energy. And It is completely self-sufficient, needing nothing else to exist, for It is all there is. It, this one tennis ball, is the Eternal Something.

Let's say the tennis ball produces another tennis ball. Which of the two will be greater, say, with respect to TIME? Ball #1. It is the Eternal Something. It has always existed. Ball #2, however, came into existence when produced by Ball #1. So one ball is finite with regard to time, the other infinite.

Which of the two will be greater with regard to POWER? Again, Ball #1. It has the ability to produce Ball #2 out of nothing -- which also means it has the ability to unproduce (destroy) Ball #2. So Ball #1 has far more power than Ball #2. In fact, at all times, Ball #2 must depend on Ball #1 for its very existence.

There's a problem with this. If Ball #1 shared some of its power with Ball #2, it would still be Ball #1's power. The question then becomes: could Ball #1 use its own power to destroy itself? No. First of all, to use its power, Ball #1 has to exist.

Second of all, Ball #1 is so powerful that anything that can possibly be done, can be done by Ball #1. But it is not possible for Ball #1 to cease to be, therefore it cannot accomplish this.

Ball #1 cannot be unproduced, for Ball #1 was never produced in the first place. Ball #1 has always existed. It is the Eternal Something. As such, it is existence. It is life, infinite life. For Ball #1 to be destroyed, there would need to be something greater. But nothing is greater than Ball #1, nor ever could be. It exists without need of anything else. It therefore cannot be changed by any external forces. It can have no end, for It has no beginning. It is the way it is and that cannot change. It cannot cease to be, for BEING is its very nature. In that sense, it is untouchable.

Want to explore more about the Eternal Something? See Who.