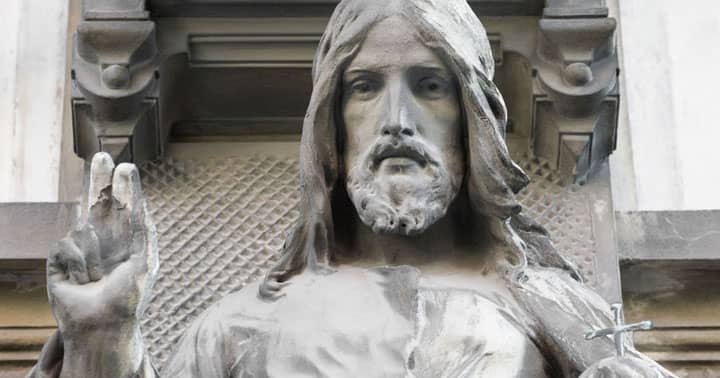 Who is the real Jesus?

The media, artists, and scholars all have their unique "take" on Jesus--how can we know the real Jesus?

Many different pictures of Jesus are shown to us in the world. Which one is the right one?

Pictures of Jesus on Television

If you watch many TV preachers, it's obvious where their hearts are: your wallet. There's always a plea for your money. They often promise that the more you give (to their ministry), the more God will bless your life materially.

Many people denounce this practice because it goes against the message of Christ. Jesus never made a petition for money. In fact, he condemned the religious leaders of his day for making a profit off the poor. In the temple in Jerusalem, when Jesus saw them buying and selling items (and price-gouging the people who had to buy things for worship), he literally made a whip and went through the temple turning over their tables (so much for the meek and mild image of Jesus).

The early followers of Jesus also denounced those who "peddled the word of God for profit." Paul, who wrote many parts of the New Testament, made tents as a living so that he could preach the message of Christ and not "become a burden" to anyone.

Material wealth has never been part of the game plan. The game plan, rather, is that Jesus' followers can have inner peace, joy, contentment -- no matter what their economic status is.

Pictures of Jesus in Art

Artist depictions of Jesus are from much later than his time walking the earth. Therefore, we do not have any way of knowing exactly what he looked like. More importantly, the Bible seems to place no great importance on Jesus' physical appearance. Isaiah tells us: "He has no form or majesty that we should look upon Him, nor appearance that we should be attracted to Him."1

It doesn't matter what Jesus looked like, because the important thing is to believe in him. After he rose from the dead, Jesus told his disciple Thomas, "Because you have seen Me, have you believed? Blessed are they who did not see, and yet believed."2

Followers of Christ are generally assumed to be from the Western hemisphere. However, faith in Jesus began in the Middle East and spread outward from there, throughout the whole earth. For example, there are millions of people today in Africa and Asia who claim to be followers of Jesus Christ. The largest church today can be found in Korea.

The Bible tells us that people who believe in Jesus are from every tribe and people and nation and language.3 Yet it is unlikely that any whole nation believes in Jesus. Certainly, it would be naive to think that everyone in the West who fills out a form as "Christian" is actually a true follower of Jesus. After all, Jesus said that the way to destruction is broad and many people travel by it; and the way to life is narrow, and few find it.4

It could be that, proportionally speaking, there is relatively the same number of Christians in America as there is in Africa, for example. We don't know for sure, but God does. He alone knows people's hearts. He knows who has turned to Him in truth and who has not. And He is impartial when it comes to race.5

Pictures of Jesus in Philosophy

Some religious "scholars" today would like to present a very comfortable, neutralized Jesus. They would like to eliminate (from the New Testament gospels) anything about Jesus that does not fit their theology.

Basically, they want a Jesus who is wise, inspiring and insightful. Anything that Jesus said that fits these mundane criteria is deemed historical, acceptable statements. But any statements that Jesus made about his power, his deity, his authority to forgive sins or grant eternal life... those statements are rejected.

If we buy this picture of Jesus, then questions arise. If Jesus was merely an inspiring teacher, then why would they torture and crucify him? Also, how do we rely on his insight about life, while ignoring everything that Jesus said about himself? And lastly, what caused so many early followers to willingly die a martyr's death proclaiming Jesus' death for our sins and miraculous resurrection from the dead? If Jesus was a teacher only, and not God, then why would so many die defending their faith in him?

Could it be that Jesus emphasized his identity as the Son of God as much as his teaching, and that what is recorded of him in Scripture is an accurate historical record?

Pictures of the Real Jesus

Rather than getting our information about Jesus from TV, art, or philosophy, he is asking all of us to come to know him through the Scriptures, God's Word. He wants us to go to him ourselves and let him teach us about himself.

To get an accurate picture of the life of Jesus and why it's not blind faith to believe in him, please see: Why Jesus is God.