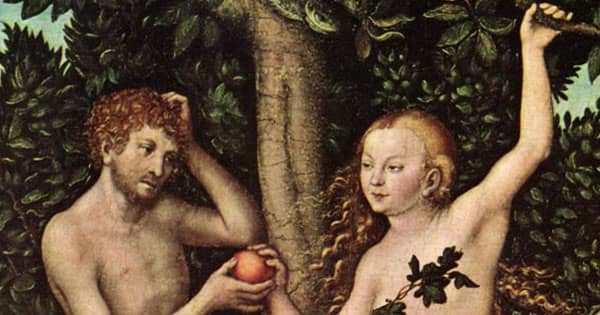 What was Adam and Eve’s sin?

Adam and Eve were the first humans. God said he made them in his image. In addition to being able to reason, make choices, love each other, they also knew God on a personal basis. They could talk with God at any time. And God provided for all their needs. Their relationship with God was unhindered. It was close, intimate, rewarding.

Adam and Eve were created with free will, the ability to choose. In fact, God assigned them a particular job to carry out. They were to take care of every living thing that God created, the animals, the birds, fish, and all the plants on earth.

In all of this, God set only one rule, one restriction. In the middle of the massive garden, there was one tree that God asked them not to eat the fruit of that tree.

As humans, we tend to be drawn to that one thing we’re not supposed to do. Even if we have hundreds of choices available to us, if we’re told one of the choices we can’t have, we immediately seem interested in that one thing.

God gave them a clear reason why he didn’t want them to eat from that one tree: they would die. They currently had eternal life, but eating of that tree would mean their life would then have an ending. It also would mean spiritual death. Their rebellion would bring a separation between them and God.

So Satan came along, disguised as a snake. And true to Satan’s nature, he lied to Adam and Eve, telling them they wouldn’t die. Satan also told them that God was withholding something wonderful from them, which God was not doing.

Adam and Eve chose to believe Satan, rather than trust what God said.

And that's just like all of us. We think we know better than God. We think God is restricting us, keeping something from us, and we have a better way. Just like Adam and Eve, we are tempted to choose to believe Satan rather than believe God.

However, out of his love for us, God provided solutions.

Regarding spiritual death, this is why Jesus came. The Bible says, “The penalty of sin is death.” God loves us and did not want us to remain spiritually dead, forever separated from God by our sin. Jesus Christ, the Son of God became man and died on a cross, paying for our sins, in our place.

“For God so loved the world, that he gave his only Son, that whoever believes in him should not perish but have eternal life.”1

Jesus, the Son of God, fully paid for our sin and offers us to come back to him, be fully forgiven, fully accepted by him.

It is our decision whether we will believe in Jesus and accept Jesus’ death for us. He offers us a relationship with him that lasts eternally. But it’s our choice.

Because of Jesus’ death for us, we can receive his complete forgiveness for all our sins and establish a close relationship with God. This explains How to Know God.

Jesus is also our solution for physical death. Right now, everyone on earth does die a physical death. No escaping that. However, when Jesus returns and he judges the world, Jesus will set up a new kingdom on earth where there is no more death.

“He will wipe away every tear from their eyes, and death shall be no more, neither shall there be mourning, nor crying, nor pain anymore, for the former things have passed away.”3

God loves you unconditionally and wants you to know him now, in this life, enjoying a close relationship with him, lasting for all eternity.

For more, see How to Know God Personally.