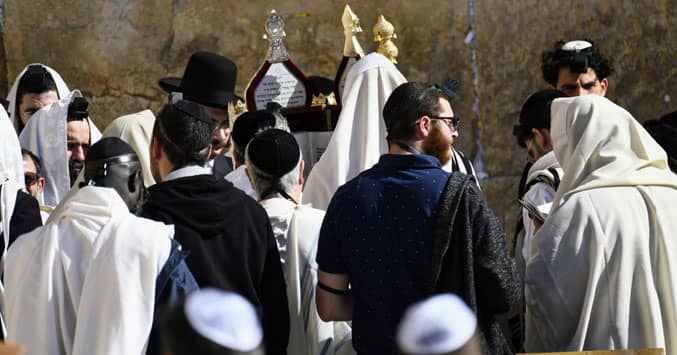 Both Judaism and Christianity have faith in a Messiah. Why don't many Jews view Jesus to be that Messiah? This explains.

Have you ever wondered why Judaism doesn't embrace Jesus as the Messiah? Certainly the "Jews for Jesus" will say that many Jews believe in Jesus, and that is true. But on the whole, why has Judaism decided that Jesus is not their Messiah?

In short, Jesus did not fit who they expected the Messiah to be. In fact, most of what Jesus did ran contrary to their view of a Messiah.

For example, in Jesus' day, the Jewish religious leaders held strictly to the Old Testament laws against working on the Sabbath. Jesus, however, healed people on the Sabbath, just as he would any other day. The Jews were offended by this and reasoned that if Jesus really was the Messiah, he would not go against these religious laws, which they believed to be set up by God. Here is one such incident. Jesus saw a man who was lame from birth (an invalid for 38 yrs):

Of course, the Jewish leaders had more issues with Jesus than just Jesus healing on the Sabbath. They thought if Jesus was the Messiah, he should think and behave more like themselves. However, rather than Jesus condemning the thieves and prostitutes, Jesus hung out with them. Rather than publicly giving honor to the religious leaders and their laws, Jesus spoke harshly against their hypocrisy. Worse, Jesus blatantly told them that he came to give them eternal life, but unless they believed in him, they would die in their sins. Hardly a way to win approval.

So what were their views of a Messiah? Mostly, the Jews then and now have looked forward to a political Savior, a King, who would reign over Israel forever.

The Old Testament Scriptures do contain a multitude of prophecies about this Messiah who will come as ruling, triumphant King and set up his kingdom. This hasn't happened yet, but will when Jesus returns. In addition to this portrayal of the Messiah as King, hundreds of other Old Testament prophecies clearly refer to the Messiah as a Savior for their sin. This is what Jesus did, and was believed by many Jews, yet rejected by many others.

When Jesus Christ came, his life fully matched over 300 specific predictions in the Old Testament. The prophet Micah predicted the Messiah would be born in Bethlehem. Isaiah foretold his miraculous birth, that a virgin would conceive. The prophet Zechariah foretold his entry into Jerusalem on a donkey and his betrayal for 30 pieces of silver by one of his followers. Isaiah described that "The Lord's anointed will preach the good news to the poor, bind up the brokenhearted..."2 The prophet David foretold the Messiah's hands and feet would be pierced and the soldiers would cast lots for his clothing.

Yet, though the prophecies are there and fulfilled, the focus for many Jews has been looking forward to a political Messiah, one who would finally, irrevocably free them from conflict with other nations. In Jesus' time, the Jews were under domination by the Romans. And many Jews were hoping that Jesus was the Messiah who would free them from the Roman government.

In response to this hope, a huge crowd set up a virtual parade for Jesus as he entered Jerusalem. They laid down palm branches across the road as Jesus rode into Jerusalem on a donkey (also prophesied regarding the Messiah). And they called out, "Blessed is he who comes in the name of the Lord." Even Jesus' disciples enthusiastically asked him, "Is this when you will set up your kingdom?" Everyone was hoping that Jesus would free the Jews from Roman domination. But that is not what Jesus came to do. He came to fulfill what Isaiah predicted about the Messiah:

"He was despised and rejected by men, a man of sorrows, and familiar with suffering. Like one from whom men hide their faces he was despised, and we esteemed him not. Surely he took up our infirmities and carried our sorrows, yet we considered him stricken by God, smitten by him, and afflicted. But he was pierced for our transgressions, he was crushed for our iniquities; the punishment that brought us peace was upon him, and by his wounds we are healed. We all, like sheep, have gone astray, each of us has turned to his own way; and the LORD has laid on him the iniquity of us all."4

Jesus came to pay for each person's individual sins, so that they could be forgiven... including the Jews. But they were not looking for a Messiah to pay for their sin. They wanted the Messiah who would come to rule the nations, which Jesus will do one day.

Just as the Jews were dominated by the Romans, even today Israel continues to be in tension with and under pressure from other nations. According to the Bible, Jerusalem will continue to be the very central location of political turmoil. This will be true until Jesus returns. And when Jesus comes the second time, he will not come humbly to pay for our sins, for that has been done. He will come the second time in fulfillment of the rest of the Old Testament prophesies about the Messiah....as King and Victor and Judge.

In the gospel of John, chapter one, we read this about Jesus:

"He was in the world, and the world was made through him, yet the world did not know him. He came to his own, and his own people did not receive him. But to all who did receive him, who believed in his name, he gave the right to become children of God..."5

Here is an article that explains why it is justified to believe in Jesus: Why Jesus is God.