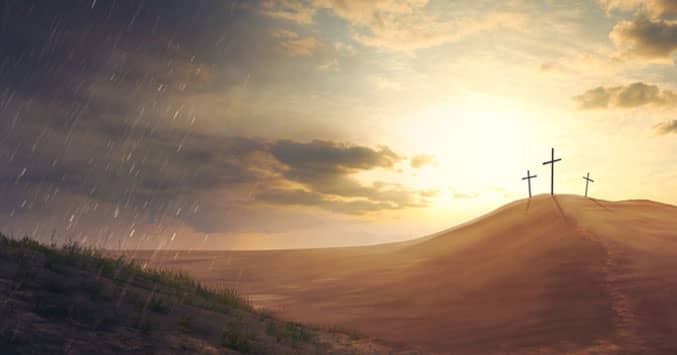 Why Did Jesus Die?

Here’s what Jesus’ death and resurrection, the crucifixion of Jesus Christ, was all about…

Jesus Christ’s death by crucifixion was reserved for the worst of criminals.

It seemed just about everyone contributed. The Jewish religious leaders, the Gentile Roman government and a mob of people all demanded his death.

It all started in a small village, not far from Jerusalem, in Israel. At 30 years of age, Jesus began teaching people about life and God.

Crowds were drawn to him. He welcomed not only the wealthy and powerful, but also the prostitutes, poor, diseased and marginalized.

Jesus called people to believe in him, saying things like, “I am the light of the world. He who follows me will not walk in darkness, but will have the light of life.”1

Why did people listen to Jesus? Because of what they saw.

“Jesus went throughout all the cities and villages ...healing every disease and every affliction.”2 The blind could see, the lame walk, lepers were freed from leprosy.

He fed a destitute crowd of 4,000 people starting with a handful of fish and loaves of bread. He did it again with 5,000 people.

During a raging storm at sea, Jesus stood and commanded the wind and rain to stop, bringing sudden calm. The men in the boat asked, “Who is this, that even the wind and seas obey him?”3

Several times he brought dead people back to life. It’s no wonder crowds followed Jesus and word of him spread.

So Why Was Jesus Crucified?

“…in vain do they worship me, teaching as doctrines the commandments of men.”

Jesus said of them, “They tie up heavy burdens, hard to bear, and lay them on people’s shoulders…”4

“You hypocrites! Well did Isaiah prophesy of you when he said, ‘This people honors me with their lips, but their heart is far from me; in vain do they worship me, teaching as doctrines the commandments of men.”5

For example, they had strict laws about the Sabbath. No cooking, no walking a certain distance, no carrying any objects, etc. It was more restrictive than restful.

On a Sabbath day, Jesus healed a man who hadn’t walked for 38 years. Jesus told the man to pick up his mat and walk. The Pharisees saw the man and said, “It is the Sabbath, and it is not lawful for you to carry your mat.” The man explained that Jesus healed him.

When the Pharisees confronted Jesus for working (healing people) on the Sabbath, Jesus said, “My Father is working until now, and I am working.”

We’re told, “This was why the Jews [the Pharisees] were seeking all the more to kill him, because not only was he breaking the Sabbath, but he was even calling God his own Father, making himself equal with God.”6

Jesus was clear about his authority, his deity. He said he could forgive sins, answer prayer and grant eternal life to all who would believe in him.

They eventually arrested Jesus. All the Old Testament prophets wrote about the coming Messiah, the Christ.

And so, at his trial, the high priest asked Jesus, “Are you the Christ, the Son of the Blessed?”

Jesus answered, “I am, and you will see the Son of Man seated at the right hand of Power, and coming with the clouds of heaven.”7 (This referred to the final judgment of the world, which Jesus was saying he would carry out.)

The high priest immediately charged him with blasphemy, claiming to be God. And they all condemned him as deserving death.

The verdict: death by crucifixion, the Roman government’s method of torture and death.

How Jesus Was Crucified

The soldiers took Jesus, created a wreath of long thorns and pressed it into Jesus' head as a mock crown, and beat him.

Then they flogged Jesus with the cat-o-nine-tails, a whip with multiple bone- or metal-tipped ends. Forty lashes were often enough to kill a person.

They nailed Jesus' wrists and feet to a cross where he hung and died of slow suffocation and heart failure. A spear was thrust into his side to confirm his death.

Jesus had already proved he had absolute power over nature, disease, even death. He healed so many people, even bringing dead people back to life. Jesus could have stepped off the cross at any moment.

“No one takes my life from me. I lay it down of my own choosing.”

This was the equivalent of someone bending over and putting their head under water, and choosing to deliberately drown when they had the power to raise their head at any moment. Jesus chose to die.

Prior to his arrest, Jesus said, “No one takes my life from me. I lay it down of my own choosing.”8 He did so purposefully. It was planned. Intentional.

Why Did Jesus Allow His Crucifixion?

For two reasons. First, to provide undeniable evidence of his deity.

Many times, before his arrest, Jesus told his disciples that he was going to be arrested, beaten and crucified. He also said that three days after being buried he would come back to life. Not reincarnated someday. But in three days, he’d be alive again.

After a horrific, public death by torture, Jesus' body was wrapped in linens and placed in a tomb. A Roman guard of soldiers was stationed at the entrance, because of Jesus’ statement that he would rise from the dead. They wanted to make sure he stayed securely buried.

Yet three days later, the boulder sealing the tomb was now found up a slope, the guards had fled, and the tomb was empty. Only the linen cloths remained.

After this, Jesus physically met with the disciples, a crowd of 500 people, and to others, multiple times over 40 days. Being physically alive provided proof that everything he had said about his ability to give us “life more abundantly” now and the gift of eternal life.

There is a second reason why Jesus went through such a brutal death. It was for us.

We all tend to act in ways that are opposed to God’s ways. Just take a quick scan of the news on any given day…racism, murders, sexual abuse, lies, hate, greed, slander, etc. As people, we have a great way of messing up our lives and the lives of others. God sees us as lost, blind and under his judgment for our ways.

Our sin is an affront to a holy God. All of our sin grieves him. We don’t live up to our own standards, let alone his. When honest, we even disgust ourselves at times. So what would a perfectly holy God see?

God says that the penalty for sin is death.9 This is why, in the Old Testament, you see God instructing the religious leaders to sacrifice a lamb once a year for the forgiveness of their sins. The lamb died in their place. But that was a temporary forgiveness. They had to do this each year.

When Jesus came, the prophet John the Baptist said this about Jesus, “Behold, the lamb of God who takes away the sins of the world.”10

Jesus came to take the penalty for humanity’s sin, for our sin, in our place. Rather than us die and be permanently, eternally separated from God, Jesus paid for our sin on the cross, in order that we could be forever forgiven and have eternal life.

This is exactly why Jesus came, as our Savior. Any sin you have ever committed, or will do, Jesus was aware of while hanging on the cross. Jesus took the punishment for our sins for us.

Our Response to the Crucifixion of Jesus

What does he ask of us? To pay him back and earn our forgiveness? No. We could never be worthy of what Jesus did for us. What he asks of us is simple...to believe in him. He asks us to accept his death on our behalf, to accept his complete forgiveness as a free gift.

“Behold, the lamb of God who takes away the sins of the world.”

Oddly enough, many people don’t want to do this. They want to try to earn their own salvation. Earn their own way into heaven. They want to show by their efforts that they are worthy of a relationship with God. ​Jesus said they will die in their sin and face judgment, because they reject what Jesus, the Son of God, did for them.

Jesus was not merely taking punishment for our sin. He was eliminating the wall that stood between us and God. He was offering far more than forgiveness. He was offering reconciliation, full acceptance, a full relationship with him, so we could know his love for us.

​This is like a wealthy billionaire not only canceling the debt a person owes him, but then turning over his entire estate to the person who couldn’t pay him back.

Eternal life, heaven, is a free gift: “For the payment for sin is death, but the gift of God is eternal life in Christ Jesus our Lord.”11

Jesus came into the world to die for us, to provide a way for us to know him intimately. It is our decision to receive the gift of a relationship with him that he is offering us.

Would you like to invite Jesus Christ into your life right now? Here is how you can.

If you just asked Jesus into your life, his crucifixion means you have accepted his gift, you are forgiven, and have an eternal relationship with him. See the link below to grow in your new relationship with God.