What You Have in Common with God 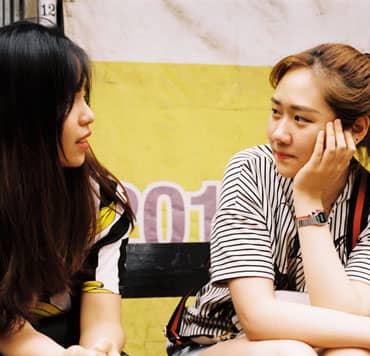 If you've ever listened closely to people's conversations, you notice something right away: people look for commonalities. Imagine that two strangers are seated next to each other on a plane. The conversation might go something like this:

"Me too. I travel all the time on business, but I never quite get used to it."

"So are you going to Baltimore on business?"

"No, I've got family there. I'm going to see some relatives."

"I've got relatives there too. Did you grow up in Baltimore?"

When we converse, we look for common themes to talk about. We search for common threads. When people can't find them, they "just don't have anything to talk about," or maybe they start talking about the weather (an obvious commonality).

It's easier to relate to people when we have things in common with them. As humans, we can relate much better to another human than to a rock or a tree. Because of the vast differences between ourselves and a plant, there is no level on which to relate. This might sound silly, but it's an obvious phenomenon in our lives.

Another thing to note: as we share more likenesses with another, relating becomes better. Even though we can't relate well with a plant, we can relate a bit better with an animal (a pet). Why? Because animals are more similar to humans than plants are. The more likenesses present between two parties, the greater their possibility of relating and the higher their possible level of relating.

Maybe this phenomenon explains something we see in the first book of the Bible. There we find out that God has made humanity "in his own image." Nothing on the earth except people are formed in God's likeness.

What does it mean to be created in God's likeness? Perhaps it is the way he has designed us to share some of the same qualities he has. Though admittedly to a lesser degree, we also can reason, feel, communicate through speech, create, imagine, hurt deeply, have joy, understand humor. And, like God, we also have a unique immaterial aspect to us -- a spirit. And we have self-consciousness -- "I think; therefore, I am."

In many ways, it seems that God has created us as finite versions of his infinite self. This should tell something about his intent: namely, that he desires to relate to us. Consider this: you, with all your unique traits and abilities and emotions and imagination, are a walking billboard illustrating qualities that are mini-examples of God's character and being. He designed us to relate to him, and you are proof of that. In fact, every person is. Even though every human being is unique unto him or herself (which is a miracle all its own), we are all in God's likeness.

And being human also means we are in a unique position to worship God. Think about it. When was the last time you were driving down a country road and saw a herd of cattle holding a religious ceremony? Except for maybe in a Far Side cartoon, animals just don't worship. But in every part of human history, and in every part of the world, human beings have been engaged in one form of worship or another. Maybe that's because we've been made in God's image, in God's likeness. Something inside us knows that life has a spiritual element to it, and that God must be involved.

To learn more about having a relationship with God, see How to Know God Personally or read the section called "John" in the Bible.